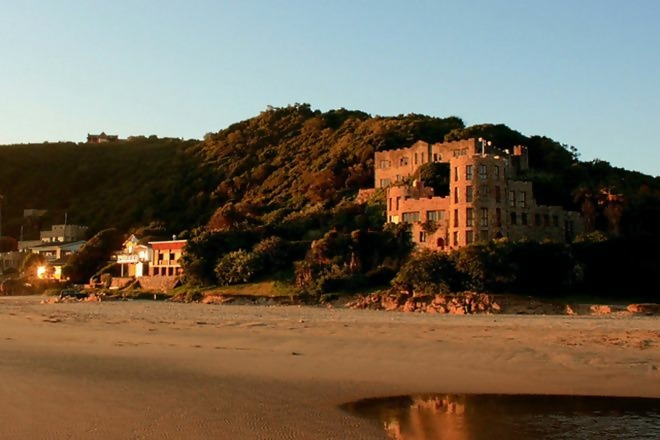 Are you planning a romantic getaway? Do you feel like being King and Queen of a castle and letting your imagination run riot as you rule over a magical kingdom?  Your castle is radiating with ethereal ambience and overlooking a small pristine cove in one of the worlds most beautiful and unspoiled beach locations!!!  What more could you ask for….

Situated on the Garden Route between Knysna and Plettenberg Bay is a place called Noetzie, it’s a well-kept secret, bordering on a nature reserve. The seaside settlement of Noetzie is famous for its castles and stone holiday homes complete with battlements and parapets, built over the past 60 years.

The name Noetzie, meaning ‘black’, refers to the dark waters of the Noetzie River. This river forms a pretty lagoon before flowing out over the small sandy beach into the sea. The little lagoon and the river offer safe swimming opportunities for visitors.

Accommodation in Noetzie ranges from castles, hotels, B&Bs, guest houses, self catering and backpackers which will suit all your individual needs, budgets and requirements.

These castles, in all their glory, are famous for their stunning oceanfront location and extraordinary designs which have made them a well known retreat for the rich and famous.

The stunning sandy beach, rocky outcrops harbouring wild oysters, the meandering river and the backdrop of fynbos covered cliffs are part of a prime nature conservation which falls under the protection of Cape Nature and was declared a conservancy in 1999.

Dolphins, sharks and whales (in season) are regular visitors, as are several species of sea birds and raptors. From June to November the whale sightings are common as the Southern Right and Humpback whales migrate into the coastal waters of the Western Cape to calve and nurse their young.

Noetzie is the proud owner of its own ghost story and the saying goes, that after a heavy storm in 1881 fishermen and woodcutters found a schooner called the Phoenix stuck on the rocks near the mouth of the river.  There was no one aboard and no sign of the crew, and the last entry in the logbook had been made five years previously!

There are a number of great activities such as hiking, fishing, whale watching, forest picnics and walking trails; paddling and kayaking on the Noetzie River and safe swimming just off the pristine beach with its fantastic surroundings. For the adventurous among us, the Noetzie beach boasts a staircase to rival the descent of Table Mountain’s nursery ravine, which goes a long way to dissuading casual tourists.

But once you’re down on the beach and the wobbly knee feeling has gone, it’s one of the nicest places to put up your umbrella, spread a towel and gently while away the afternoon.

You’d be mistaken to take the stares of our feathered friends the oystercatchers personally with their red eyes and red beaks and the strange, almost embarrassed expression on their faces – because there aren’t many people, oystercatchers can breed in peace at Noetzie and have made it their home.

Noetzie is a place that you will remember and a place to return in the future, where you can forget the stresses of your everyday life in an environment of complete peace, tranquillity and absolute seclusion.

We’ll see you around – live your best Life Today!